The older I get, the more I look back into my family tree and realize that the people I came from were or are amazing and yes — inspirational. From my granny who raised fourteen children on her own to my Choctaw great-great-great grandfather who could have gotten land from the government for free but insisted on working for his own.

I value the stories of my relatives and the obstacles they overcame to survive. I hope my own children and grandchildren will care to know what kind of people they are made of. Every generation needs heroes to remind us that hard work won’t kill us, perseverance and dedication are something to strongly desire so we can all reach our dreams.

I don’t have to go back far to think about people who are truly inspirational. I’m sure you also have relatives that completely amaze you.

My uncle is one of those people. By bloodline, he’s actually my cousin, but at a very young age his mother contracted tuberculosis and our granny adopted him along with his brother after hunting him down and riding on a bus to bring him home. She was already raising most of the other twelve children, but she could not live knowing one of her grandkids was out there without family.

My uncle came into a new home that was about as poor as you can get. It was a rental house out in the middle of the Oklahoma backwoods and the only way to town for them was their feet and a walk of about five miles. There was plenty going against my uncle in an impoverished house filled with mouths to feed, but that never seemed to outweigh the love that was also rich within those walls.

It seems to me that my uncle started working from the time he could walk. Once in school he joined the agriculture scene raising award-winning chickens, pigs and ducks. They lived close to the county dump which offered my uncle a plethora of projects to try. He and his brothers took apart clocks, radios and anything else that might be salvageable. Those projects came after many chores and hunting through the woods to put meat on the table.

As a teenager he worked in the small town movie theater running the projector. My mama sold popcorn there during intermissions. It was where my daddy first saw her and immediately fell in love. But I digress. My uncle’s entrepreneurial pursuits had just begun.

After graduating from high school, my uncle moved 2000 miles from home and moved in with my parents near Long Beach, California. Like my daddy, my uncle worked three jobs. Our house should have had a revolving door because either my daddy was coming or going, or my uncle was.

In the 1950s, my uncle’s heart was set on a piece of land that he believed would make him a fortune. He didn’t have quite enough money, so he borrowed some from my parents. When he sold that land it was worth millions of dollars.

Those years of tinkering with junk from the dump really paid off. Anything mechanical, my uncle could fix. When he moved to the Bay Area he wanted to work for a crane company. He approached the hiring manager for a job as a mechanic. The manager hardly gave him the time of day but my uncle persisted. 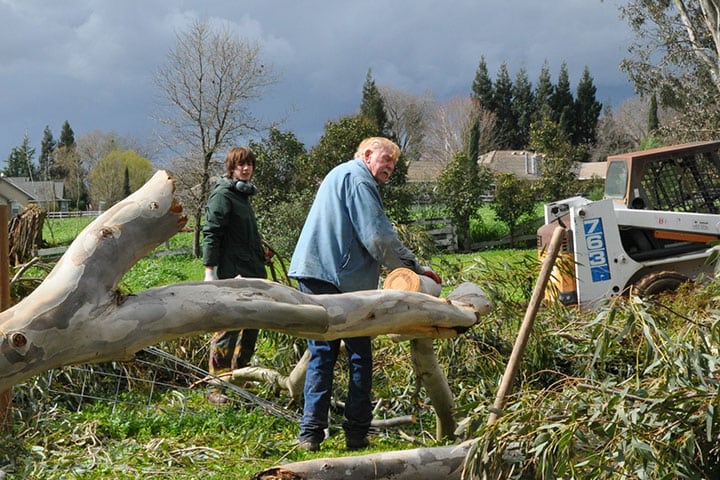 “Well I have a crane that no one has been able to fix for six months,” said the manager to my uncle. “If you can get it going today, you have a job.”

Within a few hours that crane was up and running. He worked for the company for decades and one of his most interesting fixes was on the double-decker carousel at a huge amusement park that was soon to open. It was a one of a kind, enormous structure that was the showcase of the park just as you walked through the gates. It had been built overseas and the park’s mechanics had tried to get it going but it took my uncle to make that monstrosity work.

I guess I’ve written a lot just to say that I’m so very proud of my uncle. He was also my first roommate when he came to live with us in Southern California. I was very mad at the world when he got married and left me alone in that room at night. My parents also paid the price because I slept with them for months before I’d stay in that room alone.

In spite of poverty, in spite of losing his brother to leukemia early in life, my uncle excelled and thrived. Now in his 80s, he has slowed down but at this time is putting the finishing touches on a new home. Yes, he’s a first rate builder too!

None of us should neglect to pass on our families’ wonderful stories, the people who overcame obstacles so that we might have a better life. I hope you’ll tell a grandkid or just one of your own grown children about an amazing person they came from. These stories are priceless.