Most people say they fear getting Alzheimer’s disease more than they fear heart disease, stroke, diabetes, or cancer, according to a number of recent polls. And a large number even fear it more than dying.

And the odds of that fear being realized seem scary, too. The Alzheimer’s Association posts the statistics that an estimated 5.4 million Americans were living with the debilitating disease in 2016. And that every 66 seconds, another person in this country develops it.

Given that fear and prevalence, there’s another tough truth that no one wants to hear: There is currently no drug to cure the condition. Despite that reality, hundreds of thousands of people with Alzheimer’s and other forms of dementia are “treated” with antipsychotic drugs. A large percentage of them live in nursing homes, where the drugs are routinely doled out to sedate and subdue residents the nursing staff has labeled as problematic or uncooperative.

Turning Deaf Ears to the Law

The drugging practice blatantly disregards laws promising nursing home residents rights and protections. A sweeping reform enacted decades ago, the Nursing Home Reform Act of 1987, created a Residents’ Bill of Rights and required nursing homes to offer compassionate care in homelike settings. It also mandated that facilities “provide services to attain or maintain the highest practicable physical, mental, and psychosocial well-being of each resident.” And the kicker: All drugs administered were to “meet the needs of each resident”—and antipsychotics, in particular, had to be carefully monitored and given only as a last resort.

Nearly 30 years after the legislation was passed, most consumer advocates lament the law has had little effect. Far from being homelike, the grand majority of facilities still more closely resemble hospitals, with centralized nurses’ stations surrounded by warrens of impersonally appointed rooms shared by several residents. Most troubling, anti-psychotics are still administered in alarming doses with a dangerous lack of oversight—the polar opposite of the elevated promises.

When legal reforms in nursing homes were again proposed in 2015, California Advocates for Nursing Home Reform (CANHR), a nonprofit advocacy organization, wrote an eloquent plea to the Centers for Medicare and Medicaid Services (CMS), the federal agency charged with overseeing nursing home care. “Nursing home care of residents who have dementia is often characterized by profound ignorance, chemical restraint, erosion of their dignity and neglect,” CANHR advocates observed. “Entering a nursing home is typically a death sentence for someone with dementia.”

That’s not hyperbolic. As CMS itself acknowledged in the preamble to the new rules proposed: two-thirds of the people dying with dementia die in nursing homes.

Urging that the regulations concerning dementia care and drug use be strengthened, CANHR also noted: “Antipsychotic drugs cause mental anguish and devastating cognitive loss that dull the spirits, sap the personalities and crush the spirits of their victims. Placing the mind of someone who is already struggling to think into a chemical strait jacket is an act of extreme cruelty.”

As they lose their abilities or speak, reason, or convey discomfort, people with Alzheimer’s Disease and other forms of dementia tend to behave in ways that many healthy people find troubling or confusing or sometimes plain annoying. That behavior may include:

Jonathan M. Evans, a geriatric specialist and medical director of two long-term care facilities in Virginia, has been an outspoken critic of the practice of prescribing psychotropic drugs, offering Senate testimony condemning it. In a recent lecture titled “Understanding and Approaching Challenging Behaviors in Dementia,” Evans emphasized to a crowd of health care professionals that most caregivers make the cardinal mistake of trying to “reason away” the challenging behaviors that many people with dementia present. It’s usually a waste of breath.

But the caregivers complained that one of their biggest challenges is that people with dementia often passively or actively resist care.

Looking at this as a problem that can’t be drugged away requires embracing the perspective of the person afflicted with dementia, who is likely to feel threatened by another person’s attempts to help with feeding, dressing, bathing, or administering medicine. The natural human reflex is to resist, to feel that it may be an assault.

Evans offered a number of practical tips to smooth the way. Among them are:

Geriatric experts and consumer advocates agree that what’s needed has long been urged: a revolution in the care offered at nursing homes—moving from a “medical model” to a “comfort model” focused on the needs of individual residents.

In debates over this change, meanings often become muzzy.

Tena Alonzo, Director of Education and Research at Beatitudes, a care program for older adults with dementia, offers a concise illustration contrasting the two types of care and attitudes behind them. 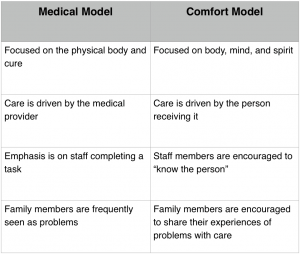 In the comfort model, instead of administering a dulling drug, nursing home staff are encouraged to look at why the person with dementia is acting “unacceptably,” usually as a natural response to an unmet need. Underlying the behavior may be pain, anger, fear, boredom, frustration, loneliness, confusion, sadness—any of the “normal human emotions” that may not be clearly expressed.

But countless studies show that nursing homes relying on anti-psychotics are invariably understaffed, and the nursing staff they do have is poorly trained nursing in dealing with residents with dementia. To bring about the revolution, care facilities need more staff with better training. But the culture is entrenched and has mostly resisted these changes.

Hope on the Horizon?

Perhaps repeating the pleas will make them stick. For example, a relatively little known provision of The Affordable Care Act of 2010 requires that the Centers for Medicare and Medicaid Services (CMS) must ensure that nursing home aides receive regular training on caring for residents with dementia and on preventing abuse. The impact of that mandate is still unclear.

For now, interested family members and friends can educate themselves on kinder, gentler ways to care for those with dementia—and urge changes for those cared for in nursing homes.

For more on the perils and reality of drug treatments in nursing homes, see Nursing Home Residents With Alzheimer’s: Drugged to Death.

One thought on “Alzheimer’s Care in Nursing Homes: Moving Away From Medicating”