I have so much gratitude for the men and women who gave themselves for our country. Since the very beginning of this brave land, the women also gave of themselves to make this country great and to keep us all free.

Two weeks ago, I met an extraordinary woman named Kay Sherman, age 92. I was sent to do an interview with her about her amazing time as a young lady during World War II. Kay was only 16 when a family friend told her she was needed by her country. He also tried to recruit her brother who was of age but he was hoping to join the armed forces. Kay’s family was also in need. The years during the war had many families barely getting by.

Women Serving the Country at Home

Kay’s friend asked her to quit high school and go to work putting together fighter jets. She was hesitant. She didn’t have a car or a license and she was just a kid. How would she get hired?

“My brother’s name is Carmello, so we changed his I.D. to Carmella and I used his I.D.,” said Sherman of her interview for the job of riveting. “Nervy, nervy, nervy. I was shaking all the while.”

But Sherman was hired and her adventure as a riveter began. She said her first day on the job was “dumbfounding.” She was working with much older women on the P-40 that Curtis-Wright was producing and doing it as fast as possible. 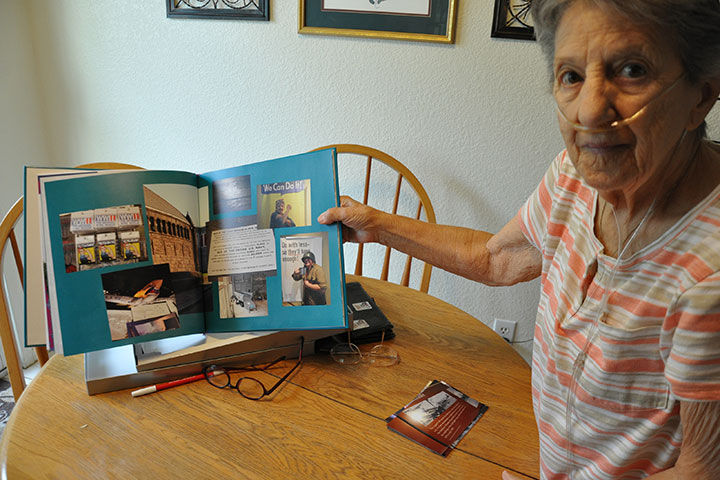 The women she worked with had a vested interest in making those planes. Sherman said everyone was concerned about the war and patriotism was very high.

“The women were all sad,” said Sherman. “Nearly all of them were missing a husband or father or son. It made you appreciate other people’s feelings. I grew up a little faster. These women, mothers, were working for their families.”

When it came to the actual work, being small was an advantage for Kay.

“We worked in teams,” said Sherman. “One person was on the outside and one inside the fuselage. The person outside was riveting and inside you had a bar to push against the skin. You had to warn the other person when the rivet was about to come through. That way they knew to push hard. It was warm and very small inside the tail but at 4 foot 11 that’s why I was there. I was very small.”

Sherman said she remembers getting that first paycheck. She was making $3.25 an hour which was a great wage for the time.

I have had the privilege of interviewing a number of these remarkable women of war. Millie left her home on a Wisconsin farm when she was fresh out of high school.

“Before I joined the Navy I worked in an ammunitions plant,” said Millie. “I was trained to test blood for the absorption of ammo on our workers. When I left for Corpus Christi I was just 22. The army knew I had experience drawing blood so they had me train medics to take blood and give I.V.’s so they could do it on the battle grounds.”

Our women veterans deserve to be remembered for their contributions to our freedom. Many women were sent overseas during wars to be nurses. Many of these women were very young and had never been away from home.

If you have a loved one who served our country don’t let those precious stories die with them. These are their legacies for you and the following generations. They are priceless.