Silver Hair on the Silver Screen. In Conversation With Sheila Malkind: Executive Director of the Legacy Film Festival on Aging

Sheila Malkind runs the Legacy Film Festival on Aging, the only three-day festival uniquely devoted to films on aging, held annually in San Francisco; it’s now in its seventh year. She took time out from screening films while gearing up for this year’s event — slated to run from September 15 through 17 — to talk about the festival’s origin, what it takes for a film to be featured there, and how she’s seen the films and attitudes toward aging change over the years. 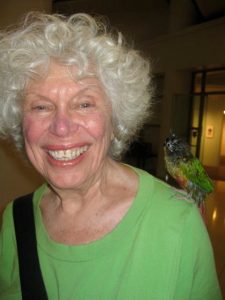 Q: First, the question on the minds of most people when they see someone drawn to the topic so many try to avoid: aging. Was there a catalyst for you?

A: To begin with, I always had an interest in older people. I always had friends my age, plus older friends. An older girl across the street walked me to and from school sometimes, and sometimes babysat my sister and me — and she was always kind and thoughtful.

Later, much later, when I was married and had children, I went to visit a great-aunt I loved who had been “forced” into a nursing home against her will because she showed signs of dementia when she left the flame on the stove after cooking something. When I went to visit her unannounced, she was all alone in an immaculate room with four beds and little else, sitting in a wheelchair. I wondered how many hours she had been sitting just that way in just that place. It hurts me even today to think about that.

As far as being drawn to aging as a career choice: I wanted to learn how to live meaningfully and effectively as I aged, through the actions and stories of those who had experienced much more of life than I.

Q: “Living meaningfully and effectively while aging” sounds sort of like the key to life. Any lessons to impart so far?

We present many artistic depictions of older adults — those who have adapted with creativity, courage, and growth. Maybe when I start falling apart on a regular basis, that description of “adaptation” will go down the drain. It’s a matter of hanging on, sometimes perhaps by one’s fingers. Love, laughter, and community seem key: But who really knows, especially if memory slips and frustrates communication?

Q: Before moving to California and establishing the Legacy Film Festival on Aging, you were connected with another film festival on aging. How do the two differ?

Money is one big difference between the festivals: For my full-time work at Silver Images, no matter what, I received a salary. And I had an assistant several days a week.

I moved to San Francisco in 2003, and almost from the beginning, began showing films on aging at several nonprofit organizations under the business name of Legacy Film Series.

Then I moved into the film fest “business” started by a colleague who gave up on it after one year. I created the current name, met kind and committed people who believed in the idea, put my own money into the startup — and was off and running. Despite some generous sponsorship, and a small grant from the Zellerbach Family Foundation, my board and I work an entire year before each festival without salaries to present films from around the world that fulfill our mission: to educate, entertain, and inspire intergenerational audiences about the issues of aging.

Q: When searching for films to show, you cast a wide net — soliciting foreign and American short and feature-length narrative, documentary, experimental and animation films. Does that make it harder to choose the best and the brightest?

A: One of the reasons we cast such a wide net in searching for and presenting films of different genres, is that until very recently, most American films that featured older adults have mostly been negative or demeaning.

Men fared better than women, though. Male stars like Clark Gable were considered “distinguished-looking” with graying hair; while older female stars usually colored their hair to look younger. And the males’ romantic counterparts were usually quite a bit younger, even as much as 20 or 30 years, thus maintaining for the male the illusion of more sexual magnetism than women of the same age.

Q: Encouraging, though, to hear you say that the film world seems to be changing some of late. Any personal theories on why this is so?

A: Well, the demographics are undeniable, for one thing: 10,000 men and women are turning 65 every day. Also, the young Hollywood stars are getting older and probably influencing the studios. Another truth these days is that movie audiences are increasingly composed of “mature audiences,” as I’ve seen them described. Young’uns are watching TV, instead. In fact, I noticed that Variety magazine mostly concentrates on TV shows and series, which feature younger actors and themes.

Q: Moving back to the big screen, what wins you over in selecting a particular film to be screened at the Legacy Film Festival on Aging?

A: Without denying the challenges of frailty, we want films that depict adaptation to life’s changes, and the potential for growth throughout the life cycle. Foreign feature films introduced the first films dealing seriously and imaginatively with aging issues, such as Alzheimer’s disease and end of life. And we love documentaries from foreign countries that show how various cultures deal with the universal issues of aging.

Q: Do you have any pet films in all you’ve seen over the years — or a film you feel has been especially effective, or instructive, or just plain moving?

A: Actually, there are one or two films we will be showing in the upcoming Legacy Film Festival on Aging, in September 2017, that are quite unusual in content. But that’s a secret right now.

My other “pet films,” surprisingly, are short ones: 30 minutes or less, both fictional and nonfictional. My favorite might be “Close Harmony,” a 30-minute film directed by Nigel Noble. It’s a 1981 Academy-Award winning documentary about a senior citizen chorus and an elementary school chorus that practice together for a combined concert. In the process, they dissolve many stereotypes about each other — and form an important bond that results in a memorable performance. It’s available, along with many other independent and entertaining films that are for rent and for sale through the Legacy Film Series catalog.

Q: On a personal note, I was surprised that several friends I invited to last year’s Legacy Film Festival — all of whom could be described as “seniors” — declined to go. One of them, who is 80, said she “didn’t want to sit around and watch a bunch of old people.” Do you encounter this attitude often — and if so, what do you do about it?

A: If I were 80 years old — which I will be in a year and a half — I would love to try to learn something from my contemporaries. But there’s still a stigma out there. In fact, one 65-year-old female film director I met, who is now making films on aging, told me that her 70-year-old husband has refused to watch her films on the subject. His response: INRY — short for “I’m Not Ready Yet.” (Note the “Yet.”)

Q: That “yet” somehow seems hopeful, since we’ll all age — if we’re lucky. But those who do attend the festival say they’re glad they did?

A: Their own words speak loudest. On the post-screening written evaluations, one moviegoer wrote, “These films help us live our lives with respect, courage, and value.” Another noted: “Made me want to live until 90.”

Q: Any advice for people who might be interested in starting up a similar festival in their own localities?

A: If you’re thinking of starting a similar festival in your locality: For the right price, we’ll come to you.