For the last decade or so, June has been decreed World Elder Abuse Awareness Month. Falling somewhere midway between National Random Action Month (January) and Fruit and Veggies — More Matters Month (September), the significance of the honorific likely gets lost on most people. But the fact that it exists at all signals a sea change in awareness of an issue long feared and ignored.

Every year, according to the National Coalition Against Domestic Violence, well over two million older Americans are subjected to physical, psychological, and other forms of abuse and neglect that qualifies as domestic violence.

With reported cases on the rise, legislation was introduced earlier this year to help build public awareness of elder abuse in general and crack down meaningfully on perpetrators. While many of the provisions of the Elder Abuse Prevention and Prosecution Act focus on telemarketing and email marketing fraud directed at seniors, it also mandates training and technical assistance for “investigating, prosecuting, pursuing, preventing, understanding, and mitigating the impact of physical, sexual, and psychological abuse of elders.”

So far, the bill has been unanimously approved by the Senate Judiciary Committee — a promising start.

The U.S. Department of Justice Office on Violence Against Women defines domestic violence as “a pattern of abusive behavior in any relationship that is used by one partner to gain or maintain power or control over another intimate partner.”

Bonnie Brandl, founder and director of the National Clearinghouse on Abuse in Later Life, emphasizes that in the case of seniors, abusers exerting power and control include family members and caregivers as well as domestic partners and spouses.

The pattern of abusive behavior may take a number of forms. Among them:

Domestic violence includes sexual abuse — sexual contact or behavior that occurs without the older adult’s explicit consent. Like other forms of such conduct, perpetrators are most often spouses or partners if the older person lives at home in the community.

But the offenders are sometimes family members, too. As part of its public awareness campaign, the Office for Victims of Crime includes powerful videos of domestic violence survivors titled “In Their Own Words.” In one particularly wrenching segment, Mary, a petite 98-year-old woman on oxygen, describes her abuse at the hands of her grandson, with whom she lived for a time:

“You know, it was done at night, late on a Sunday afternoon about six o’clock and it went on till two o’clock in the morning on Monday morning, and it went on that long. And he was so drunk…. He grabbed me up and threw me on his bed and raped me.”

Photos from the crime scene show large shards of broken glass that was deeply embedded in Mary’s legs when the grandson forcibly dragged her from the house across the yard into a shed and back. 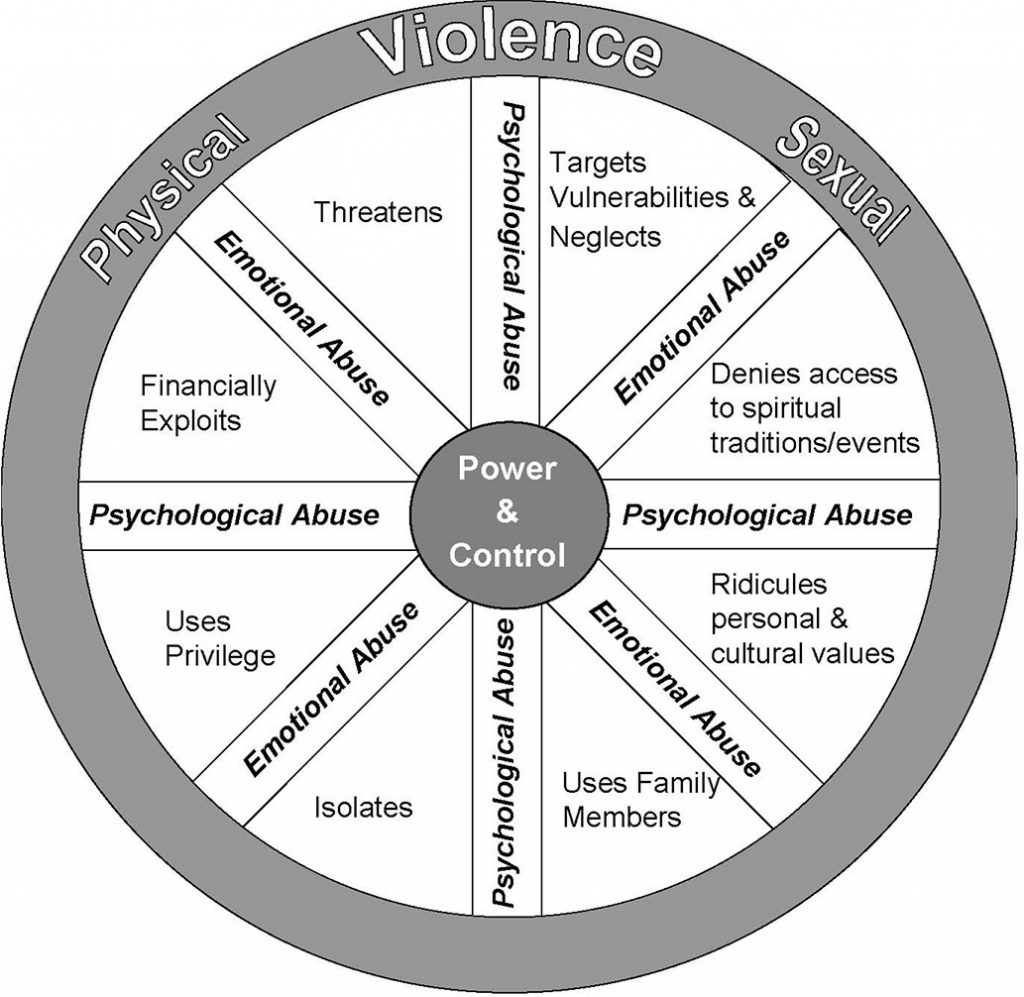 The Abuse in Later Life Wheel

Studies consistently show that a great majority of such abuse cases among elders involve women who are abused by their spouses. In long-term relationships, the bad behavior has usually occurred throughout the couple’s time together, though elder abuse may also occur in later life relationships with new partners. And occasionally, there is “late onset elder abuse” — a change to violent or abusive behavior that may also be a function of substance abuse, anger issues, or cognitive disabilities that develop in older age.

One recent national survey focused on perpetrators who physically mistreated those age 60 and older and found that:

And older women are likely to suffer far more severe health-related trauma than younger women who survive these forms of domestic violence.

Experts advise family members, friends, and other outsiders who suspect that an older person is being subjected to domestic violence or abuse to be alert to a number of potential warning signs. They include:

Experts also advise gently asking the senior about the signals spotted, without being accusatory. And when the older person has become withdrawn and unavailable, it may be essential to invite him or her out — away from the suspected abuser — or get other individuals into the home as often as possible to help monitor what’s going on behind closed doors.

Finally, those who are prompted to ask questions about suspect domestic violence must be ready to listen to the senior’s answers — and not judge or scold. It’s also helpful for those who are concerned to be equipped with some knowledge about the realities and complications of domestic violence and to have outside resources he or she can consult for help.

Groups offering helplines, shelter, legal advocacy, and other support to those subjected to domestic violence — particularly battered women — have been around for decades. A growing number of them, though not all, now offer help and support specifically targeted to seniors; usually it is free or low-cost and confidentiality is assured.

You can report suspected instances of elder domestic violence or abuse to the Eldercare Locator at 1-800-677-1116, which should be able to put you in touch with the appropriate local authority. It is helpful if you can provide the address and zip code of the person you suspect is being abused.

Additional sources offering information and support for older people include: