As I’ve said for years, the world is poised on the precipice of what could be called a demographic tsumani. Cogitate on these numbers for a moment: 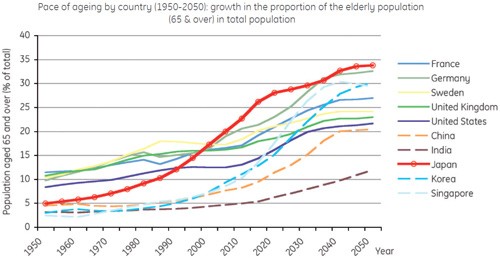 Growth in the proportion of elderly population across several industrialized nations. From http://bit.ly/245d4VJ

Obviously, these numbers have huge implications. I’ve been seeing projections like these looming for years, way back when I started my career in geriatrics in the early ‘00s (pronounced as “ought-oughts,” as an aside). In fact, and more to the point — graphs like the above are one of the reasons I decided to specialize in this kind of work. For a short time, I considered child and family psychology as a specialty. I assumed a growing population would mean more children born, and therefore, a growing base of individuals who would potentially need my help. But graphs like the above really illustrate that the population in the industrialized world isn’t getting younger, it’s getting older.

Here’s some more data to illustrate this point, focusing on the US now: 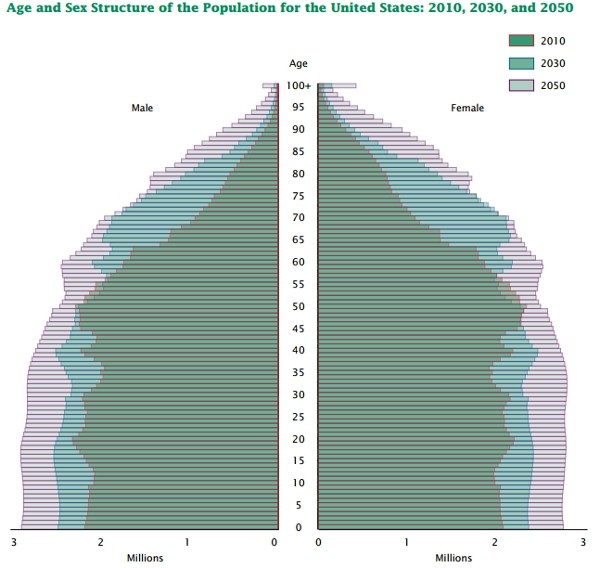 Population projections of the US by Age and Sex (from http://bit.ly/21ccSBM, taken from US Census Bureau Data)

You can even view this data in the form of animations. For example, study this Business Insider article (its charts take the data all the way up to the year 2100). You can see that the shape of the age curve that represents the US population (as well as much of the industrialized world) is flattening. This is an effect that has massive implications for the shape of modern society to come. Everything from how the US government’s Social Security program is funded, the structure of the healthcare system in coming years, our entire US economy in fact will change.

Another striking example for you: In Japan, which is by many measures ahead of the United States in terms of the aging of its population, sales of adult incontinence briefs now outstrips sales of children’s diapers. This is, in part, a stark illustration of the fact that much of Japan’s population is now made up of older adults who require these products in order to maintain basic hygiene and independence in their later years. But this example also illustrates the degree to which the population boom in older adults has resulted in the mainstreaming of products that were once considered “taboo.” Incontinence products are now very visibly seen on the shelves at my local Costco, placed very near the kiosk where they sell hearing aids (likely not a coincidence of any kind).

So, as a long-term care psychologist, the question I have is: how do these trends impact the demand for nursing homes? The easy answer is — “duh, that’s obvious Dr. Lane” — as the proportion of the US population that’s over the age of 70 grows (and it will grow precipitously over the coming years); the demand for nursing homes will rise rapidly, and risk overwhelming our system of long-term care and elder care, at least according to some.

If current disability trends hold (that is, adults in the US age 65 and older spend between two-thirds to three-quarters of their post-65 years free of disability), or get worse; and if the current methods for funding long-term care continue on into the future (primarily Medicaid), we will be absolutely swamped by the amount of money we will need to spend (and be taxed for) in order to fund such care. Moreover, if the US economy continues to expand at such an anemic rate compared to previous historical trends, this problem could be extremely difficult to tackle.

But not so fast, says James Knickman and Emily Snell, at the Robert Wood Johnson Foundation. In their excellent article The 2030 Problem: Caring for Aging Baby Boomers, Knickman and Snell paint a more optimistic portrait of the future.

It’s Not All Bad

Second, we might see the Medicaid-dominated system of financing long-term care, which is inefficient, expensive, and provides all sorts of negative incentives for economization of care amongst those who need it, get supplanted with more nimble, efficient, market-driven alternatives. (Hey, you never know.) The market for long-term care insurance, which many agree has seen little growth at best and has been highly dysfunctional at its worst, might actually take off. Or, perhaps a viable system of nationally-funded long-term care insurance might finally take shape?

Third, a lot of prognosticators and thinkers fret and worry about the high ‘dependency ratio’ posed by the aging baby boomer population. In the 1950s, there were an average of seven working-age adults for every elderly individual. Today, that number has dropped to four, and it’s projected that by 2050 the number will drop to 2.5. While this will no doubt play havoc with the pyramidal structuring of the Social Security system (as current workers pay for the benefits of current retirees), authors Knickman and Snell point out that this is not much different than the dependency ratios that existed when the baby boomers were children (and also required care). Progress and the economy didn’t stop when the baby boomers were dependent children, and it likely won’t stop when they become dependent older adults as well.

Fourth, who says that long-term care (e.g., skilled nursing care) is the only way to care for older adults? Baby boomers seem to have a lot more going for them than their older counterparts (for example, the majority of current seniors in the US – Korean War and WWII-era individuals, the “Greatest Generation”). While a lot of seniors living in nursing homes currently may have had a rough start in life, perhaps suffering prenatal malnutrition, poor access to education, or other privations, the Baby Boom generation had a much better shot. In this group, educational attainment is higher (which tends to be associated with lowered disability status),  access to prenatal and early childhood resources has been better (better nutrition, medical care, etc.), they smoke less, and the Baby Boom generation really does seem to understand that it’s important to be physically active in later years.

Finally, medical research into a number of illnesses that plague and disable the elderly (such as dementia) continues apace, and again, there could be some medical advances on the horizon that spell great things for the future of older adults living independently well into their later years.

However, there’s still a problem. A big one.

The One Health Problem to Beat Them All

One final graph for you, and in my opinion, one that might really might lend some ammunition to the more pessimistic of takes: 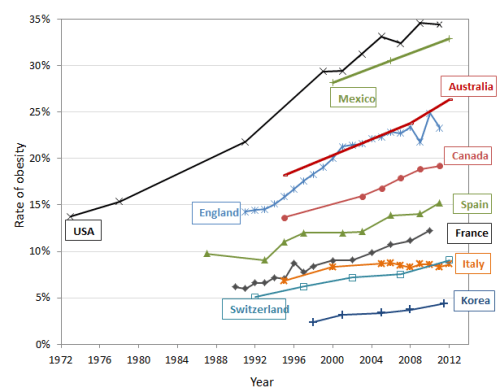 Obesity Trends in the Industrialized World (From OECD)

This is derived from the Organization for Economic Cooperation and Development in their 2014 analysis of worldwide trends in obesity. You see the black line at the top of the graph? That’s the United States. We lead the world in obesity trends, with currently one in every three adults being obese (that’s obese, not merely overweight).

While I do tend to believe that it’s always better to be physically active than not, and exercise is important, I do not tend to believe there is such a thing as being “fit and fat.” I think it’s a dangerous myth that it’s better to be a physically active obese individual than it is to be of normal weight and otherwise sedentary. Recent large-scale metanalytic research, as well as research looking at over a million Swedish men, tends to support my position.

So what does this mean? Personally, I think the United States is in a lot of trouble. I don’t have a lot of faith in the long-term economic sustainability of the Medicaid-driven system of long-term care financing. I also am extremely pessimistic about the obesity trends sketched out above — we’re reaching serious critical mass in terms of the obesity epidemic, and despite the other improvements in health markers that have been achieved by the Baby Boom generation, they are, in my opinion, on track to be suffering disability rates in excess of previous generations, and have it be driven entirely by health-related issues.

On the other hand, I tend to think there’s a lot to say for American ingenuity and creativity. Anyone who has followed my personal blog knows that I’m a big fan of innovation and technology. Maybe, just maybe, the US will finally get a handle on its obesity problem, and maybe, just maybe, we can continue to innovate and find new ways to provide care for the older adults who need it. And who knows, maybe the US economy’s best days are ahead, and not behind us. You never know….

Geoffrey W. Lane, Ph.D., ABPP is a psychologist dually licensed in California and Oregon and board certified in geropsychology with the American Board of Professional Psychology (e.g., ABGERO). Dr. Lane has a B.A. in Psychology from Reed College, and a Ph.D. from Palo Alto University. He completed his predoctoral internship in geropsychology at the University of Medicine and Dentistry of New Jersey (UMDNJ), and postdoctoral fellowship in geropychology at the University of Rochester Medical Center in New York State. Dr. Lane has been the staff psychologist at the VA Palo Alto Healthcare System's (VAPAHCS) 'Community Living Center' (CLC) in Livermore since 2007. Dr. Lane also has worked for many years providing consultation-based services to local organizations such as San Francisco's Institute on Aging and Mountain View's Avenidas' Rose Kleiner Adult Day Health program. Dr. Lane maintains a blog with other articles on aging-related issues at https://olderadults.wordpress.com. Additional information as to how to contact Dr. Lane directly can be found at https://geoffreylanephd.wordpress.com.