A new study, relying on Census Bureau data from all 50 states, shows that Social Security checks are an essential lifeline for millions of Americans.

The Center on Budget and Policy Priorities (CBPP) released a report last month which shows that government checks lifted over 15 million elderly Americans out of poverty in 2015. The same study indicated that over 7 million Americans with disabilities, disabled workers, and children were also lifted out of poverty thanks to Social Security assistance.

CBPP’s report underscores the importance of Social Security for millions of America’s most vulnerable citizens, the elderly. The organization points out that the program is a critical retirement resource, especially for women and minorities: “Women tend to earn less than men, take more time out of the paid workforce, accumulate fewer savings, and receive smaller pensions. Women also live longer than men, on average, so many outlive their spouses and savings.”

Like women, African Americans and Latinos have lower-than-average earnings over a lifetime. This means they have fewer options and resources for saving up for retirement — making Social Security a vital part of life after their working years. CBPP explains, “Without Social Security, the poverty rate among elderly Latinos would approach 50 percent, and the poverty rate among elderly African Americans would exceed 50 percent.”

The think tank also came to the conclusion that without these benefits from the government, 40.5 percent of elderly Americans would have incomes that fall below the national poverty line. 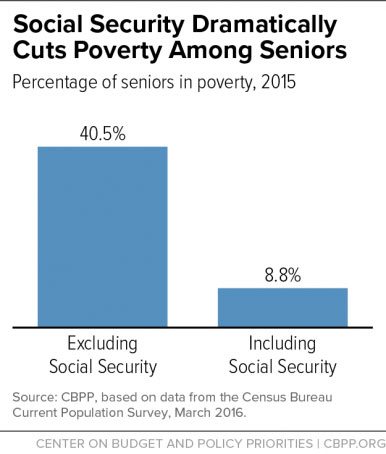 Percentage of Seniors in Poverty

CBPP conducts its research by examining census data provided by each individual state. They also measure poverty by the national standard — $11,367 for an elderly individual, $14,342 for an elderly couple, and $24,257 for an average family of four.

Here in the graph below, you can see just how much Social Security helped the elderly in each state. 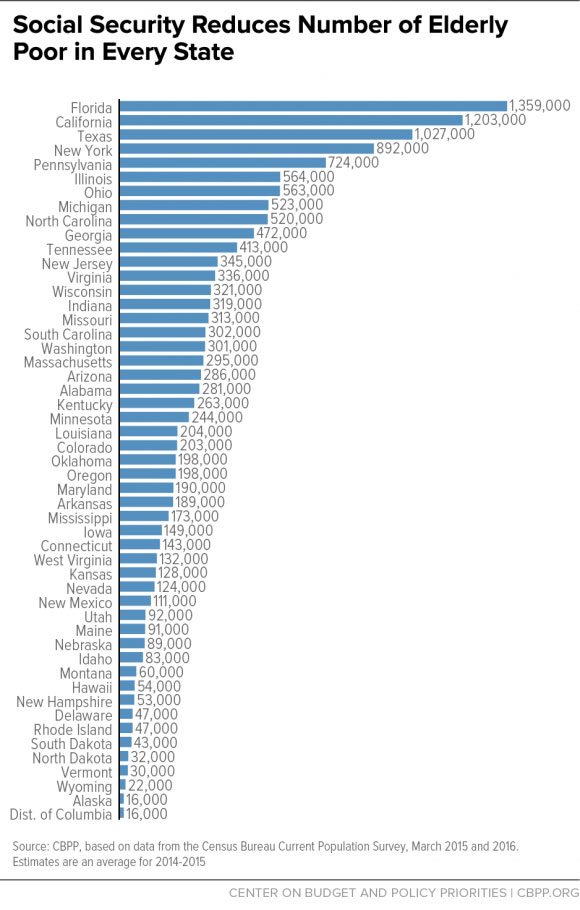 Reduction of Elderly Poor by State

The Social Security program lifted the most (more than 1.3 million) elderly people out of poverty in Florida. The least amount of people lifted out of poverty was the District of Columbia, with just 16,000 impoverished seniors. But, it’s important to remember these numbers are directly relevant to the size of the state at hand.

With that in mind, Mississippi is the state that has the largest percentage of elderly residents lifted out of poverty thanks to Social Security. As of 2015, 14.5 percent of Mississippi residents 65 and older were living in poverty — but without the benefits of the Social Security program, the think tank found that number would more than quadruple to 59.6 percent.

Benefits Are Necessary, But So Is Reform

The funds that the Center on Budget and Policy Priorities say are essential to 15.1 million elderly Americans could be at risk, though.

The program is expected to fall short on funding by 2034 because of the Baby Boomers. Without action by our government, Social Security won’t be able to pay those beneficiaries their promised funds.

There’s bipartisan agreement that the program needs to be reformed – but Congress is split on how to do just that. Progressives suggest revenue increases while conservatives would rather cut benefits.

But because the issue is so divided, reform on the issue could be long delayed. Until then, millions of Americans will continue to benefit from the Social Security program.

Know someone who would enjoy this read, or learn something from it? Be sure to share this article with your friends.

Cate is an American freelance writer, journalist, and editor living in the Netherlands. When she's not digging for a story, you can find her riding her bike and taking photos around Holland - sometimes simultaneously.

View all posts by Catherine Misczuk →